Governor Godwin Obaseki confirmed his defection on Friday afternoon via his official twitter handle which reads: “I have officially joined the @OfficialPDPNig
to advance my ambition to seek re-election as Governor of Edo State.

I, as always, remain committed to engendering good governance and sustainable development of our dear state”.

Governor Godwin Obaseki’s deception did not come as surprise as he has earlier been disqualified by illegal screening committee self imposed by suspended national chairman of the party, Comrade Adams Oshiomole.

Ourworldgist would keep you updated as the political chess game unfolds in Edo State.

Spread the love
ALSO READ THIS:  Just In: Oshiomhole Should Inform Us Of His Visit To Edo – Obaseki
TAGEdo
Previous PostBreaking: Npower Commences Enrolment Of New Applicants As Its Roles Out Enhancement Scheme Plan For Old Beneficiaries Next PostJust In: Mixed Feeling As Hon Ugbede Paul Ebije Congratulates Governor Yahaya Bello At 45 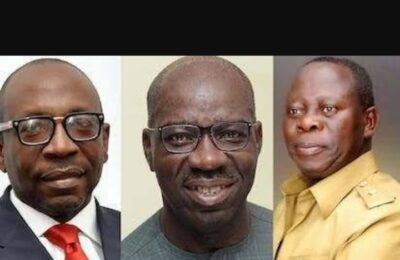 Just In: PDP Steps Up Their Game As Campaign Council Vows To Ensure Obaseki’s Reelection