The Executive Director, Projects of Niger Delta Development Commission, NDDC, and Chairman of NDDC Contracts Verification Committee, Dr. Cairo Ojougboh, has alleged that the NDDC awarded Emergency Contracts worth N2 trillion between 2016 and 2019.

He alleged that the contracts were cornered by principal officers of the National Assembly.

“Let me say this, the speaker and the senate president are not aware of what the chairmen of the committees are doing in the national assembly, as members of the committee are not also aware. It is just a one-man squad only.

And I said it, between 2016 and 2019, emergency contracts of over N2 trillion were awarded under the supervision of the chairmen of both committees and this is the list of the awardees and this is how they were all distributed.

In this list, the chairman senate committee on behalf of the senate (signed it) and when we asked the members of the committee, they didn’t know.

They said they don’t know. He collect 1,000 of those jobs and said he was going to give them to his aides” he said.

He further added that the chairman of the house committee asked for N150 billion in contracts on behalf of the House of Reps.

Recall that the Minister of NDDC, Mr Godswill Akpabio has earlier on Monday alleged at the probe panel that 60% of the contracts at the NDDC are executed by lawmakers and in a reaction, the Speaker of House of the House of Representative, Femi Gbajamila threatened Akpabio to within 48hrs name these lawmakers else he would be prosecuted.

With this latest accusation, Nigerians are now waiting the next statement from Nigerian lawmakers whether they will accept this allegation or debunk it again.

Spread the love
ALSO READ THIS:  Opinion: Looking At NDDC, EFCC & Others, The Fight Against Corruption Has Missed The Boat By Meduoye Adeyinka
TAG#GodswillAkpabio #Lawmakers #NDDC #ProbePanel
Previous PostOpinion: How To Grow Your Business From Feedbacks By, Nguvan Kyenge Next PostHon Paul Ugbede Ebije Sets To Receive Double Awards 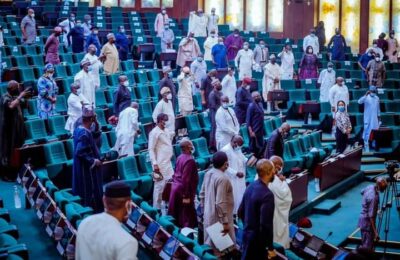 Opinion: Looking At NDDC, EFCC & Others, The Fight Against Corruption Has Missed The Boat By Meduoye Adeyinka