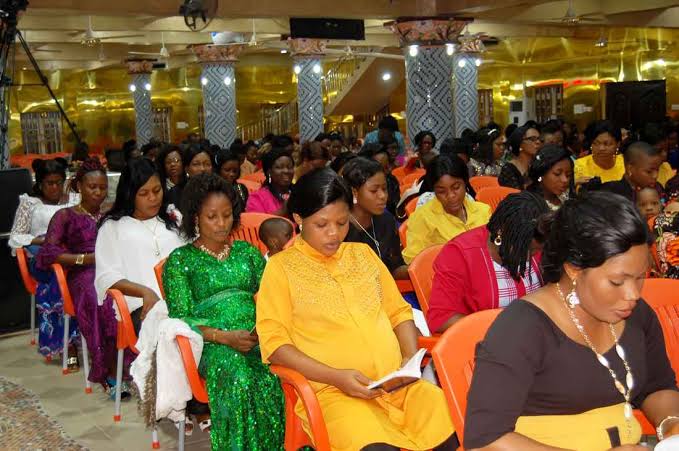 Pastor Who Specialises In Snatching & Swapping Wives, Marrying Mothers & Daughters To Face CAN

One Apostle Harrison Charles of “Day Spring Assembly ” Onisha, who is in the business of Snatching and swapping peoples’ wives would soon face Christian Association of Nigeria (CAN), Nigeria Police and Conglomeration of Civil Societies of Nigeria for violation of human rights and other related offences.

Speaking on Radio and Television Reality show on Monday, being 15th November, 2021, the President of the station popularly known as ” Ordinary President, Ahmed Isah, said, ” CAN, and other authorities concern would be contacted over this matter, while, the reality Radio & Television show ( Human Rights Radio & Television 101.1 a.k.a Brekete Family ) will follow the matter meticulously at all stages of the investigation to unravel the reason behind the pastor’s attitude “.

Earlier on the show, some group of men mostly in their 50 and 60 from    Anambara, Enugu and Abia had narrated how the said Apostle Harrison Charles had long ago unlawfully taken their wives and female children from and converted them to his wives and all efforts made to recover them proved abortive as the man who is stupendously very rich often bribes his way out of police cases and court litigations.

They said Apostle Harrison Charles is “semi god in Onisha” and nobody dares his atrocities and remains “alive” around Onisha as he has ways of bringing such person down” and even has his personal burial ground where he buries people whom he has held hostage.

When ourworldgist seeks to know more about this Vampire in question, it stumbles on a news published by ZENITHBLOG.COM on 18th May, 2017 and here is a revelation made by one victim , ChizzyFaithia.

Through Zenithblog.com, ChizzyFathia speaks:
“His name is Apostle Harrison Charles, once my pastor though. He has 58 wives in the last 6 years and 28 children. Some of the wives were being snatched from their husbands who happen to be his members too.

“7 of the wives are dead now and he buries them in his land where he bought in Awada without proper burial rites.

“All he does is to employ few people to dig the graves and that’s it. He sleeps with kids, when I say kids, I mean from 18 years up to 45 years old women.

“Nobody confronts him anymore because all those who have attempted it die mysteriously afterwards.

“You can do your own investigation if you so wish…and I’ll guide you in doing so. He bribes his way out of police cases. The latest now is that he now dashes some of his children to couples in the church that do not have children medically.

“He preaches that when an apostle fornicates, it’s divinely. People still attend his church because they are under a spell. Please help me circulate this story.”

According to Chizzyfaithia, the pastor wears real animal skin to the pulpit to preach,with some strange mantles which he uses for ‘destruction’.

“He calls himself prophet of the end time and wears real animal skin on the pulpit with some strange mantles which he uses for destruction only. So many souls are being trapped in this man’s occutic web.
“I lived with this man when I was young, at age 7 because of the prophecy he gave my parents then. I lived with him for 9 years. He is worse than Rev King.”

Asked if the pastor lives with all the wives and she said:

“Yes he lives with all the wives. He has a mansion he built from the plots of land he acquired from some few rich members he already snatched their wives and had killed. If the deceased has a son, he will tell the woman to send her son to the orphanage or back to his former husband’s people, if the woman has a grown daughter like 15+, he will marry the woman and her daughter as well.

“If he wants to enter a family, I mean targeted (victims) he will first of all ask the woman to stop having s*x with her husband, stop taking care of him as the husband just in other to create rifts between them.

Then when they start having issues, he would ask the woman to come live in the church, and then excommunicates the man in question from the church, the next thing he will give the woman some huge amount of money to go and return her bride-price to his husband’s people.”

When ZENITHBLOG.com asked Chizzyfaithia how she escaped from the alleged shackles of the pastor, she said:

“It was only God….all my family members were victims. I escaped long time ago, leaving my family there,follow now forced my dad to throw me out at the age of 19…”

Below is one of the links to the videos Chizzyfaithia gave to ZENITHBLOG.com as the pastor’s preaching:

Just In: CAN Condemns Dunamis Church Attack As She Vows That Perpetrators Must Be Brought To Book.

Just In: Christian Association of Nigeria (CAN) Out Rightly Rejects New CAMA Completely.