Home Politics A Celebration of Mahdi Shehu & A Vindication of Nyesom Wike By, Nwankwo T. Nwaezeigwe 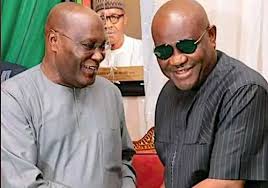 A Celebration of Mahdi Shehu & A Vindication of Nyesom Wike By, Nwankwo T. Nwaezeigwe

As Governor Nyesom Wike face off with the Peoples Democratic Party ( PDP ), continues, Professor Nwankwo Tony Nwaezeigwe, has come from another angle to write on what he titles as : “A Celebration of Mahdi Shehu & A Vindication of Nyesom Wike”

Let us read what he has to write on this one:
“Once upon a time a group called Southern Governors’ Forum met in Asaba and declared on Oath of their respective offices that power must shift to the South in 2023.

Where is integrity of leadership? Where lays the essence of Oath of office?

Was the Holy Bible not right when it states in Hosea 5:1 that judgment shall begin from his people?

Let me first profoundly thank that Great man of our time called Nyesom Wike, the Governor of Rivers State. His Excellency by every act of his office!

By every meaning of his name which expresses strength! And by his unwavering patriotism! Proudly Ikwerre! Proudly Igbo! Proudly Southerner! Proudly Christian! And proudly Nigerian!

At every point of history when the Children of Israel appeared to be in a state of despair, the God of Abraham, Isaac and Jacob always come to their rescue with a leader of unequalled intrepidity.

Think of a situation where there is nobody like Governor Nyesom Wike in People’s Democratic Party.

I want to assure His Excellency that the masses of Southern Nigeria and Nigerian Christians are fully behind him.

I think under the present political circumstances there can be no better Obidient than His Excellency Nyesom Wike.

Let Nigerians, particularly the Southerners, both Christians and Muslims be properly guided.

If there is any Fulani leader we should be thankful to at this time of national trial it is none other than Mahdi Shehu.

I always take cognizance of the meaning of the names of every Fulani sent on contemptible errands; and I think Mahdi Shehui’s names are in tandem with his contemptible task.

While his tirade might appear bogusly hateful to most of us, it is in fact the underlining policy of the Muslim Fulani oligarchy of the North which some of us are aware of and which our political leaders are equally aware of but shamelessly refuse to admit because of their destructive and self-centered politics.

Did those Southerners hoping for massive Northern Muslim support for Bola Ahmed Tinubu listen to him?

Did the raving political scavenger called Reno Omokri listen to him?

Did Asari Dokubo the Mujahedeen of the South listen to him? Did Rochas Anayo Okorocha hear him?

Where is Pastor Tunde Bakare the Man of God who took bank loan to construct a mega-Church which Bola Ahmed promised to write off once he becomes the President of Nigeria?

Where is that scammer and ex-convict miscalled a Prophet?

I mean that ugly man called Israel Oladele Ogundipe; a man who is still not ashamed to call himself a Prophet of God.

These are the group of Yoruba Christians who celebrated, rather than mourn Owo massacre.

Those instead of preaching the unity of Christians and unity of the South are still drunk with the vile passion of outdated ethnic wickedness.

Mahdi Shehu tells us that the North is one. How can the North be one? Is it in religion? Is it in language? Is it in culture? Or is it in historical experience?

In the past we were deceived to believe that there was one group of people called Hausa-Fulani; but today the Hausa have been ignominiously subtracted from the Hausa-Fulani ethnic conglomerate and all we have now is a group called Fulani powered by Miyetti Allah.

Where are the Hausa—the original landlords and owners of the land the Fulani today claim to lord over?

The bulk of what is today Middle Belt Region of Nigeria were never conquered by Usman dan Fodio and his hawkish jihadists.

The bulk of what is today Zamfara and Kebbi States were never conquered by the Fulani.

The present people of Kebbi South Senatorial District were never conquered by the Fulani.

The City State of Argungu was never conquered by the Fulani.

Nor were the Kanuri, Kanembu, Shuwa Arab, Fika and other ethnic groups of Borno Empire conquered by the arrogant Fulani now claiming to be lords of Nigeria. How can they tell us that the North is one people?

This is a thesis that never existed and cannot stand the test our present lives and times.

But who do we blame for our present political predicament?

I will neither blame the British who amalgamated us for their selfish political interest nor will I blame the Fulani for using every opportunity at their disposal to assert their collective ethnic and religious interests over and above other indolent Nigerians.

Were the British Colonial masters the reason Dr. Nnamdi Azikiwe and Chief Obafemi Awolowo refused to cooperate in political terms?

Let me not go into the gory vagaries of the Nigerian civil war, for as a professional historian my views might not be in tandem with what some people might expect me to say.

But were the British colonial masters the ones that aided Murtala Mohammed—a known hawkish jihadist to seize power from Yakubu Gowon—a Christian?

Without the support of the some Southern and Middle Belt States would Shehu Shagari had won the Presidency two times?

Who were those who sustained General Ibrahim Babangida in power for eight years and colluded with him in the annulment of M. K. O. Abiola’s Presidential victory?

Who were those who colluded with Abacha in his five years in power? Were they not Christians and Southerners?

Let me ask, who were those who joined the Muslim Fulani to pull down President Goodluck Jonathan down?

ALSO READ THIS:  Breaking: President Muhammadu Buhari Sets To Address The Nation By 8pm As Another Lockdown Is Imminent

Were they not Christians both North and South? Who were those who fanatically supported Muhammadu Buhari in 2015?

Were they not the same Christians of North and South?

Who is Iyorcha Ayu? Is he not a Tiv man? Who is David Mark? Is he not an Idoma man? Who is Atiku Abubakar? Is he not a Fulani man? Which people in Nigeria have been slaughtered without restriction by the Fulani herdsmen and bandits more than the Tiv and Idoma?

Were these two men not the ones that facilitated the emergence of Atiku Abubakar as the PDP Presidential candidate in their respective roles as National Chairman and Chairman of National Convention Committee?

Who was Deborah Samuel? Was she not an Idoma girl, the same ethnic group with David Mark?

Did Atiku Abubakar not dismiss his Igbo-born spokesman for condemning the stoning of Deborah Samuel to death in order to please his Muslim Fulani brothers who gruesomely killed the poor girl?

For how long shall our political and religious leaders be infected with chronic amnesia to the extent that there are no yesterday and tomorrow, but only today in their political dictionaries?

We have no feeling of our slaughtered brethren both North and South.

Otherwise how can we explain the fact that few months ago more than seventy defenceless Christians were slaughtered in Owo Catholic Church on a Sunday while worshipping God and all have so soon become unaccounted history?

We have so soon forgotten the gruesome murder of our innocent daughter and sister, Miss Deborah Samuel in a fashion that only defines the crudeness of a religion that defines itself as a religion of peace without the news of a single arrest and prosecution of the perpetrators.

Our people continue to be abducted and slaughtered on a daily basis by the Fulani inspired bandits and herdsmen and our political leaders feel relaxed in the comfort of their homes and offices because they have armed guards as protectors.

For our Middle Belt and Northern Christian Brethren, there is no doubt that as those who directly wear the shoes, they know where it pinches.

This is the reason Southerners and Middle Belt Christians should prophetically celebrate Majors Chukwuma Nzeogwu and Gideon Orkar as our heroes who saw tomorrow but never lived to witness it.

Once upon a time we were told and we continue to be told that Nigeria is a Muslim majority nation; that Muslims are more than Christians in population in Nigeria.

ALSO READ THIS:  On the mandate of Austin Okai I/we stand by Samuel Abimaje.

Yet the Government of Nigeria has never included religion in their successive population counts. How they arrived at that conclusion we do not know.

I believe this is the time to do the counting ourselves and this can only be done through the coming 2023 Presidential election.

Let us all boldly stand up and stop this nonsense of uncanny Muslim arrogance in a country that does not belong to them as of historical rights.

I particularly call on all the Christians of Northern Nigeria to rise up and defend their historical rights and identities by voting for a Christian in the coming 2023 Presidential election; for that is the only way their senseless slaughter by Muslim bandits and Fulani herdsmen will stop.

I call upon the Christians of Benue, Taraba, Nasarawa, Kogi, Plateau, Kaduna, Gombe, Kwarra, Bauchi, Kebbi and those of Borno, Yobe, Niger, Kano, Jigawa, Katsina, Sokoto, and Zamfara whose existence is not in reckoning before their traditional and political leaderships to rise up wherever they find themselves and count themselves as Christian.

The watchwords are Christians of Nigeria count thy selves as Children of God.

Yes! Counting ourselves are words of God as enshrined in the Holy Bible.

The hope of every child of God is to be counted among the Children of God.

And there is no better time to be counted as the Children of God than the 2023 Presidential Election.

Let me conclude by stating unequivocally that Peter Obi has won the 2023 Presidential election and the only man standing on the way of this divine-driven victory is the INEC Chairman Prof Mamoud Yakubu who as a Fulani man is on oath to return fellow Fulani man to power by whatever means possible.

Nigerians will agree with me that as a Fulani Mamoud Yakubu cannot be unbiased.

He will definitely use his office to declare Atiku Abubakar winner of the Presidential election against Peter Obi’s obvious victory.

I therefore call on all patriotic Nigerians to call on Mamoud Yakubu to resign his position as INEC Chairman to ensure transparency; otherwise Nigerians will expect rigging from the high places”.

Spread the love
TAG#NysomWike #Tony #ourworldgist
Previous PostSpecial Independence Promo: "Get One Plot Of Land For Free ( T&Cs Applied )" Next PostI Mourn Queen Elizabeth II For I Live Because Of British Colobialism By, Nwankwo T. Nwaezeigwe 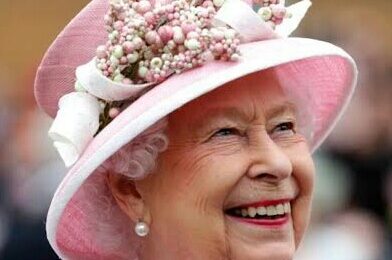 I Mourn Queen Elizabeth II For I Live Because Of British Colobialism By, Nwankwo T. Nwaezeigwe 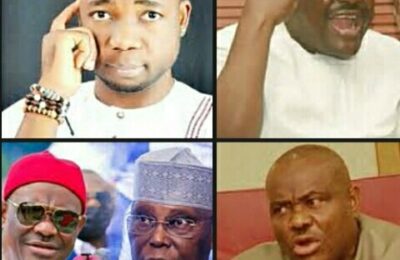 With Or Without You, God Has Ordained Who Will Be The Next Nigerian President Already – Nollywood Actor Makolo Calls Out Lousy Wike 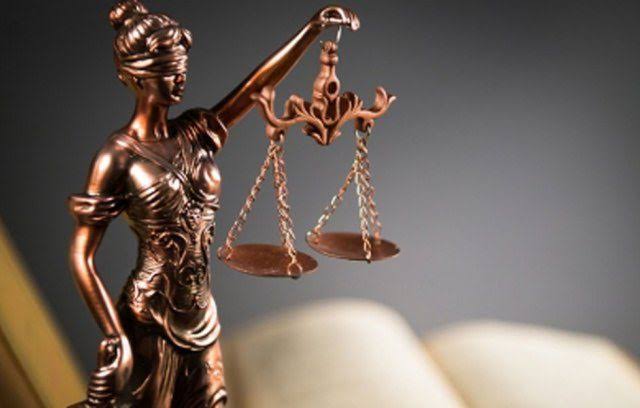