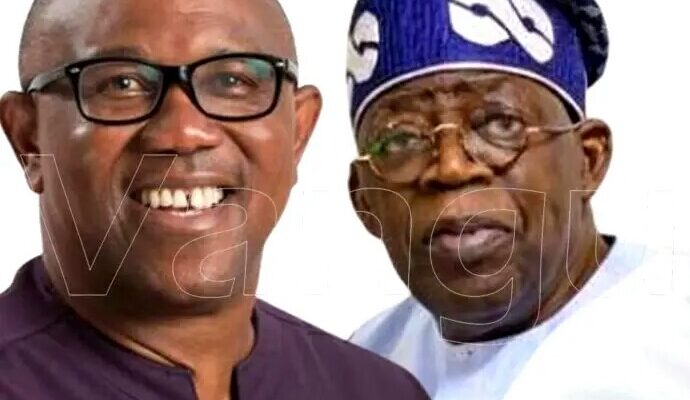 This trending politician, Peter Obi, is not just a ‘force’ but an ideology which has culminated into a movement call “Obid-dient Movement’.

This Obid-dient Movement has made Muslim- Muslim Ticket of All Progressive Party ( APC ), as an insensitive decision considering the issues of religion, region, and ethnicity that have played leading role in our governance.

Adams Oshiomole ,which was used and dumbed but now gradually resurrecting from political exile because of his affinity with Asiwaju Bola Ahmed Tinubu is also an issue of concern for every political analyst.

It is against this background that Professor Nwankwo Tony Nwaezeigwe, writes on a topic : ” Obid-dient’ Movement, Muslim-Muslim Ticket & The Tragedy  Of Adams Oshiomole’s Political ‘Parrotism” with a sub topic as ” Ode to a Political Judas Iscariot”.

Let us read what he has to say:

If I were Adams Oshiomhole I will adopt former Governor Willy Obiano’s strategy of quietly jetting out of the country to an obscure Caribbean Island nation with my Cape Verdean wife and cool off with my stolen public money.

The reason I believe, is that this is the time some of us who know the skeletons in the political cupboards of the likes of Comrade Adams Aliyu Oshiomhole will not leave any stone unturned to let the cats out of the bags.

I state here in black and white that Comrade Adams Aliyu Oshiomhole lacks the moral legerdemain both as a past labour union leader and APC politician to pontificate to Nigerian Christians on why they should support the APC Muslim-Muslim ticket.

Beyond the academics, I have had some stints in labour unionism.

I was the Propaganda Secretary of Civil Service Technical Workers Union of Nigeria (CSTWUN) Enugu Airport Branch, Emene, Enugu, from 1982 to 1984; and this is without prejudice to my brief but controversial role as Interim Secretary of the University of Nigeria, Nsukka Branch of Academic Staff Union of Universities (ASUU).

I have had the opportunity of interacting personally albeit briefly with Comrade Adams Oshiomhole when I was a personal adviser to the iconic trade unionist and pro-democracy activist; one of the finest of such personalities Nigeria has ever produced and only second to Chief Michael Imoudu. I mean the Urhobo Ovu-born Chief Frank Ovie-Kokori—former General Secretary of the then powerful Nigeria Union of Petroleum and Natural Gas Workers (NUPENG).

I have also been close to Comrade Pascal Bafyau from his stint as General Secretary of Nigerian Union of Railwaymen to the exalted position of President of Nigerian Labour Congress (NLC), under whom Adams Oshiomhole served as Vice President and later succeeded as NLC President.

Beyond wickedness, this is pure political witchcraft in action—Adams Oshiomhole at the lowest and worst ebb of his personality as a former Trade Union Leader, former Governor of Edo State, and former National Chairman of APC.

Is Adams Aliyu Oshiomhole not aware that for over six months Nigrrian universities have been under lock and key with the students and staff roaming the streets of their villages, towns and cities while the same APC government is buying luxury vehicles for Niger Republic?

Is Adams Oshiomhole still not aware that some of the victims of March 29 2022 Abuja-Kaduna train kidnapping as still in captivity?

Is Adams Aliyu Oshiomhole not aware that the cost of fuel for which he joined Muhammadu Buhari to protest against under President Goodluck Jonathan has gone berserk?

And that even the Nigerian army created and empowered to protect the territorial integrity of the nation have themselves become internal victims of an internal war they did not bargain for! Yes!

Those the gods wish to destroy, they first make mad. Does Adams Oshiomhole think every Nigerian is Arewa Textile factory worker?

The time of reckoning is fast approaching when, to rightly parody our literary icon Chinua Achebe, things will fall apart and the centre shall no longer hold.

For those people familiar with the annulled June 12 1993 Presidential election that precipitated the formation of National Democratic Coalition (NADECO) on 15 May 1994 there will never be an authentic historical account of the origins of the present fourth republic without the copious mention of the name “Frank Ovie-Kokori.

Needless to say that Chief Frank Ovie-Kokori remains one of the most unsung warriors of Nigerian democracy today.

The questions are, where was Comrade Aliyu Adams Oshiomhole and what were his roles during that tumultuous period of precipitous sacrifice by the likes of Chief Frank Ovie-Kokori?

This is pertinent because in all the accounts of his biography, there was no single mention of his pro-democracy activism or roles during the annulled June 12 struggles.

They reaped where they did not sow and those who sacrificed for the present democratic windfall have had their names cast into the dustbin of jaded Nigerian history.

At the start of the Pro-June 12 struggles Bola Ahmed Tinubu quickly sneaked away to the United States of America comfortably making money, while the likes of Chief Frank Ovie-Kokori and Engineer Funso Williams remained in Nigeria under General Sani Abacha gulag; only to return and use his money to clandestinely appropriate the Alliance for Democracy Governorship position Funso Williams struggled for.

The same Funso Williams was later cut off the face of the earth in a most gruesome manner.

They sold out to both Generals Ibrahim Babangida and Sani Abacha against the resolve of the Nigerian workers and masses to reinstate the annulled June 12 1993 Presidential mandate.

They both collected huge sums of money particularly from General Sani Abacha to scuttle the June 12 presidential election result and subsequently stopped the workers from undertaking industrial actions against the military dictatorship, living Chief Frank Ovie-Kokori and his NUPENG as the only Nigerian trade union as the scapegoat and standing for justice and democracy in Nigeria.

These same labour leaders were also responsible for the eventual revelation to of Chief Frank Ovie-Kokori’s hiding place to the Federal security agents and his consequent arrest and incarceration.

It is striking to note that both Bola Ahmed Tinubu and Adams Oshiomhole as State Governors out of fear of Chief Frank Ovie-Kokori’s anti-corruption stance, refused to empower him or even recommend him for a single National Merit Award.

Beyond the above black-leggism, Adams Oshiomhole equally has some explanations to make over the death of comrade Ubani Chime in a ghastly accident with his official Toyota Land-cruiser SUV along Borno-Yobe axis, penultimate his governorship election.

This is because it was weird for Oshiomhole to have abruptly abandoned his official car and decided to take a flight back to Abuja against the original plan of the group traveling back together.

One can now understand why the present chaotic governance of the Nigerian nation means nothing to the man Adams Aliyu Oshiomhole.

He saw the crescendo of his once persuasive eloquence gradually decrease to parrot-style missive timbre, talking but not communicating.

He manipulated Chief Odigie-Oyegun out of APC national Chairmanship for the sake of protecting his master—Tinubu’s interest, until he was thrown overboard.

What other message has the Devil’s disciple other than the continuation of the journey to hell? This is Adams Oshiomhole’s message today and any other day.

I listened to Comrade Adams Aliyu Oshiomhole state that if Obi-dients, those he describes as “Obi-dients of disobedience” go after him, he would go after them.

ALSO READ THIS:  Moghalu4Nigeria Train In Idah Urges The Residents To Support The Movement

One however does not know how Adams Oshiomhole will go after the Nigerian masses, knowing the power of the masses as a trade union leader in such a time as this.

Anyway, the Obi-dients had had the likes of Asari Dokubo, Reno Omokri, and recently Sam Omatseye, so Oshiomhole’s political parrotism will not make a difference. Since he has decided to join the league of South-South hirelings advancing for the perpetual Islamization of Southern Nigeria and the on-going carnage against Nigerian Christians, he should wait for not just the curse of the people or the chastisement of the Obi-dients as he feared but the wrath of God.

I also listened to him state that the Christian Association of Nigeria (CAN) has no business in Politics. In his words: “CAN in all respects is not a political party.” He went further to state that: “I think Nigeria’s challenges are beyond religion.

If religion is the answer, we have both churches and we have more mosques.” This statement does not just portray Adams Oshiomhole as a man of little brain, but someone who believes in the Fulani doctrine of every other Nigerian outside the Fulani should think like cows.

In a country where jihadists are already operating within the nation’s capital engaging and killing security forces, Christians are being massacred in their Churches, people are being kidnapped and killed or ransoms demanded, and many people are refugees in their country, someone who calls himself a progressive labour leader and politician opened his mouth wide with ridiculous audacity to state that Nigeria’s challenges are beyond religion?

One can now understand why Adams Oshiomhole never made a single statement of sympathy or condolence to the people of Owo and Ondo State over the Catholic Church massacre; yet he claims to be a Catholic by the grace of his late wife.

Some of us fully understand why Adams Oshiomhole does not feel a pinch of conscience over the on-going massacre of Christians, kidnappings, and the increasing advance of Islamic insurgents within the periphery of Nigeria’s national Capital Abuja.

We are fully aware that Adams (Adamu) Aliyu Oshiomhole remains a Muslim by heart and a Christian only in body. He was born and bred a Muslim and only became a Christian by the incident of his marriage to late Mrs. Clara Oshiomhole.

So he remains by every standard of his unmoving conscience a Muslim. He therefore lacks the moral competence to advise the Christians of Nigeria against what they consider as threat to their existence.

Least he forgets, he mounted the same podium against Obaseki’s second term and fell flat from it; unless he is constructing another podium outside the APC”.

Spread the love
Previous PostWhatsApp Gets New Privacy Setting That Many Admire Next PostTheobarth Disbursement: Aside Old Collection, You Recently Collected Over N60M But You Are Yet To Disburse - Ikenga

Theobarth Disbursement: Aside Old Collection, You Recently Collected Over N60M But You Are Yet To Disburse – Ikenga