Home Legal Dekina/Bassa: “ Bar & Bench Group ” Honours Usman Okai Austin As An ICON of Democracy Endorses Him Ahead Of 2023 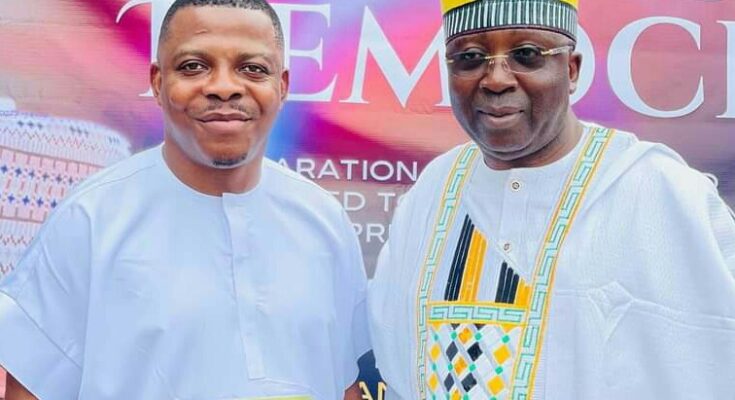 It was a cheering moment at Abuja, the Nation’s capital on Wednesday being 10th August 2022 as respected Chief Ogwu James Onoja ( SAN) under the auspices of “Bar & Bench Group” endorsed Comrade Usman Austin Okai, the leading candidate in Dekina/Bassa federal House of Representatives under the platform of Peoples’ Democratic Party (PDP).

OurWorldGist gathered from an event titled, “Icons of democracy” the candidate from Dekina/Bassa federal constituency received an encomium from Chief Ogwu James Onoja ( SAN ) who described him as a burning gold gearing to massively hit Igala Kingdom.

Chief Ogwu James Onoja (SAN), further described Usman Okai Austin, as a rugged activist who has over the years demonstrated his tenacity in Kogi State and Nigeria at large.

Chief Onoja further said that Okai‘s passion to fight injustice, is not just a weapon to achieve legal desire, but also serves as a catalyst to help those in position of authority listen to the yearning and aspiration of the people.

He added that as at the time people abandoned him because he was not dancing to their inordinate ambition, only Okai and few others stood by him stressing that, he will also stand with Okai come rain or sun shine.

Chief Onoja also said, “We’re here today, because we believe in what these people can be, I will not only stand by them during the electioneering period, but also wheel my knowledge and resources to their end should anyone dares to rig the election next year”.

Earlier, the citation of Usman Austin Okai which received loud ovation from the cheering crowd was read by Isah Haruna.

There were also good will message from Dr Jeremiah Ekele, Honourable Faruk Adejoh amongst others.

The event which was well attended by people from all strata of society to include, Alhaji Kashim from Ogane Nigu, Felix Achile from Ajiolo, Farouk Audu Adejoh former local government chairman, from Biraidu district, Amidu Isah, the PDP Anyigba Ward Chairman, Barrister Peter Idenyi an astute legal luminary amongst others was a huge success.

The grand finale of the event was the presentation of award to comrade Usman Austin Okai by Honourable Faruk Adejoh.

Comrade Usman Austin Okai In A Cheering Mood Displaying The Award On ” Icon Of Democracy ” To The Applauding Crowd At Bar & Bench House, Wuye Abuja On 10th August 2022

Spread the love
ALSO READ THIS:  Just In: Governor #Zulum Of Borno Shows Up In The Hospital 12Am To Restore People' Hope
TAG#ComradeUsmanAustineOkai #ourworldgist
Previous PostTheobarth: If You Are Not Ready To Disburse, Why Did You Collect, N500k? - Ubamga Questions Apostle Theophilus Next PostWhatsApp Gets New Privacy Setting That Many Admire