Home Politics Sheria Collapsed Bridge: Okai Calls On The Government To Come To The Aid Of The People 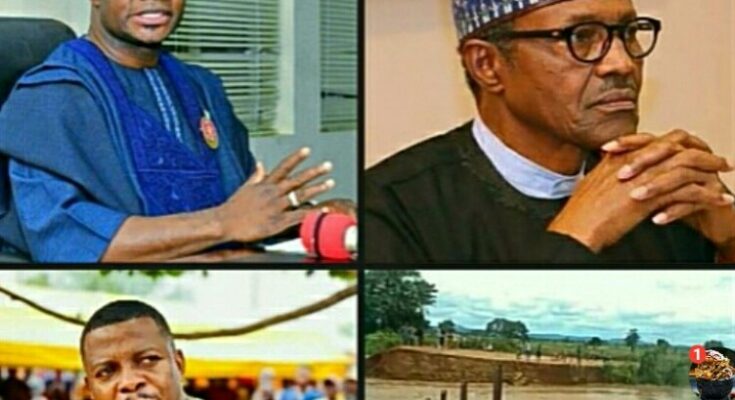 Sheria Collapsed Bridge: Okai Calls On The Government To Come To The Aid Of The People

The Flag bearer of the Peoples Democratic Party ( PDP ), for Dekina / Bassa Federal Constituency comes 2023 election, Comrade Usman Austin  Okai, has called on both the State and the Federal Governments to come to the aid of the peoples’ of Bassa land over Sheria Collapsed bridge.

Usman Austin Okai, made the call while on “Thank You Tour“ to the delegates of the area who voted for him massively during the last PDP’s primaries that produced him as the winner.

Okai, said, it is pathetic that the only Federal road linking the Peoples of the area to other part of the state has collapsed”.

He added “Though, the road is in the category of a truck A which makes it the federal government road, however, because of the urgency that is required to repair the bridge, Kogi State Government under the watch of Governor Yahaya Adosa Bello, should go into action to repair the road to avoid administrative bottleneck that the road might suffer in the hands of the Federal Government”.

He stressed, ” My pain at the moment is that there is no alternative road for the Peoples’ of the area and as such in the case of emergency that requires basic medical attention outside the local government area, the Peoples are completely overwhelmed and stranded”.

Okai Speaks further, ” as worse as it is, the people of Sheria cannot go to Oguma now”.

” This is a bad omen and something has to be done urgently to savage the situation”.

Sheria’s Bridge that collapsed early August 2022 is the only access road linking the Peoples of the area to other part of the state.